There is something interesting in the book written by one of the Indonesian scholars known as ‘Abdush Shamad Falimbani. He is among those who teach Sufism to his students. But in the book, he brought a lot of Qur’an texts and hadiths. This research is limited to two problem formulations, including: what the contribution of ‘Abdush Shamad Falimbani in the distribution of hadith through the book of nashihah al-muslimin is and how the content of the hadith in the book Nasihah al-Muslimin is. This research is included in a variety of qualitative research. The data is collected by the document study method which is related to several research variables. The primary document is the book Nasihah al-Muslimin owned by the writer,it is then supplemented by secondary documents in the form of files that can be downloaded for free on the internet. Data analysis is done by reducing the data needed to answer the problem formulations.

There are several conclusions from this study, including: first, The contribution of ‘Abdush Shamad Falimbani in the distribution of hadith in Indonesia through the book Nashihah al-Muslimin is enormous. Many Muslims join the call for jihad to raise the sentence of Allah through the delivery of the Qur'anic texts and many hadiths in the book. Various sources of hadith references are supported by his presence at the time of writing the book when he stayed in the Arabian Peninsula, so that references to hadith books can be found easily and are sufficient. Second, the content of the hadith in the book of Nashihah al-Muslimin which is very dense is a proof of the contribution of ‘Abdush Shamad who was quite good in his day. Although, There has not yet obtained from his work that specifically discusses the narration of the hadith. But his efforts in the mention of hadiths that can be traced in the books of the hadith are an effort that should be grateful.

Most read articles by the same author(s) 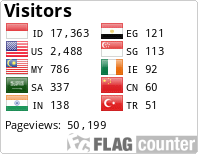